Let’s begin with a simple definition of what Cross Platform Mobile Development is. It is a manner of writing single codebase for applications, which could be used on different operating systems. It is a known fact how difficult Multi-Platform Mobile App Formatting can be. Each platform functions differently and is unique in its own way. However, one could say that Cross-platform apps are the “in-thing” today. So as a developer, it is essential to develop best cross-formatted apps. Fortunately, there are some really good Cross Platform Mobile Development tools / platforms / frameworks in the market today (they have for sure evolved quite a bit). We bring to you the Top 5.

PhoneGap is an award-winning Mobile Development Cross Platform that is capable of creating applications for Symbian, Android, Blackberry, Palm, iOS (iPhone and iPads) and Windows. These developers write their applications based on web shortcuts such as JavaScript, HTML, and CSS3. It is also open source and free, so there are no licensing costs. PhoneGap works systematically, and provides developers an easy access to hardware components. Like the accelerometer, camera, sound, GPS tracker and many more which are quite advanced in nature. In addition, PhoneGaps also conducts training to developers for free who are willing to make it big in this industry.

Appcelerator creates Cross Platform Mobile Apps through Web Programming languages such as PHP, JavaScript, HTML, Python and Ruby. One of the best things about Appcelerator is that it provides its users with more than 300 API’s and location information to access easily. It is known to power over 1000 native apps in a month. For the 3rd Party Components, it provides value-adds such as Backend-as-a-Service (BaaS), app analytics and a marketplace.

Sencha Touch as a Cross Platform Mobile Development tool is a HTML5 mobile application framework for iPhone, Android, and BlackBerry. Sencha Touch can be used to develop UI’s for mobile web applications that have a look and feel like those of native applications on the supported mobile devices.

This is a very interesting tool for Cross Platform Mobile Development. Whoop claims that they are “the one-stop mobile app publishing platform for non-developers.” They state that they are suitable for even non developers. This is considered one of the best ways to go for beginners in Mobile Development. Although, there is an ease in its use, it does not possess many important requirements for the latest features on hardware. It consists of a WYSIWYG interface which allows the developers to easily drop app elements to attain the desired result.

MoSync is an advanced SDK for Cross Platform Mobile Development. This SDK provides the developers with many useful tools such as runtimes, libraries, integrated compilers and more. It includes Eclipse based IDE and supports C/C++, PHP, Python, Ruby, JavaScript, and Java. MoSync supports OS’ such as Android, Windows Mobile, Moblin, Symbian, Mobile Linux distro. The release of MoSync 2.4, will allow support for iPhone OS and BlackBerry.

It offers Rhodes, an open source integrated framework based on Ruby. This is basically used to develop applications that can be used on several other mobile OS’. It allows native applications to be developed for Symbian, Android, Windows Mobile, iOS and RIM. RhoMobile provides a framework, which needs the developer to just code once. This same code can be used to develop apps for different OS’.

Cross Platform Mobile Development tools are in huge demand today. We hope these are able to help you in developing an awesome app! 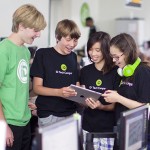