Tools to Expand Utility of Ruby on Rails

Ruby on Rails is one of the most versatile and dynamic high level programming language for object oriented jobs. The multi level framework makes the task easier and quicker for the programmers looking to expand the flexibility of their job irrespective of the scale and complexity of the project. This however makes it a hard fact that Ruby on Rails is not for beginners. To be a Ruby on Rails professional, one has to gain at least 5 years of experience with added software engineering skills. To make things easier, Ruby 4.2 already comes with several new features that make it the top programming language used globally. Here are some of the tools that will expand the flexibility of the language up by a notch. 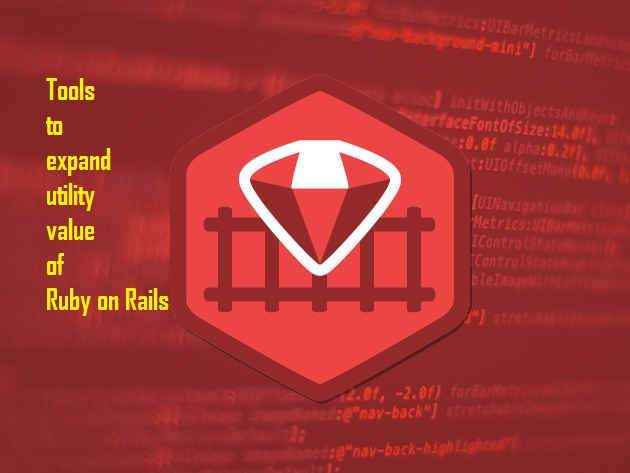 The Active Job is added as a ne adaptive layer that compliments commanding queuing systems including Resque, Delayed Job, Sidekiq, etc. It allows programmers to write jobs directly to the queuing systems which will run them with no changes whatsoever. On top of this, the Action Mailer enables programmers to add the “#deliver_later” tag which in turn will add an email id as a job in the queue.

Adequate Record has been added to Ruby 4.2 as a set of updated patches and other fixes, making the execution time almost half. Active Record has been commonly used to construct SQL strings with multiple transformations. To process scripts faster, Adequate Record separates static and dynamic data, wherein the former is sent directly to the cache process. This makes Active Record a highly functional tool to convert AST strings to SQL strings passed onto databases.

Web Console is a specialized set of debugging tool for Rails installation. In case Rails encounters errors, this interactive console helps the programmer quickly inspect and trace codes that seem to be conflicting. The console brings in added advantage for Ruby on Rails as it can even be shared with your co-developer without the need to configure a new system. The console can be operated in the browser using a command line interface.

Ruby on Rails is now attached with excellent support to add or remove foreign keys. Quick removal of keys just requires them to be dumped into the theschema.rb. As of now, MySQL, mysql2 and gresql have foreign key support. Further, programmers can utilize the “connection#supports_foreign_keys?” to determine whether the current adapter supports the APIs being used.

There had been several issues with the HTML sanitizer that Ruby on Rails offered in previous versions. However, the current version offers a more robust alternative that has been built upon Loofah and Nokogiri. This makes the tool more secure and the HTML sanitization process more flexible. Also, the new algorithms make the sanitized output greatly different from pathological inputs of the past. For programmers still looking for the output that the older sanitizer version offered, you just need to add “rails-deprecated sanitizer gem” into the gemfile. This brings back the old behavior.

These new tools to Ruby on Rails will undoubtedly make the platform more robust and user friendly. Let us know which of these features you will be using in your next RoR project.