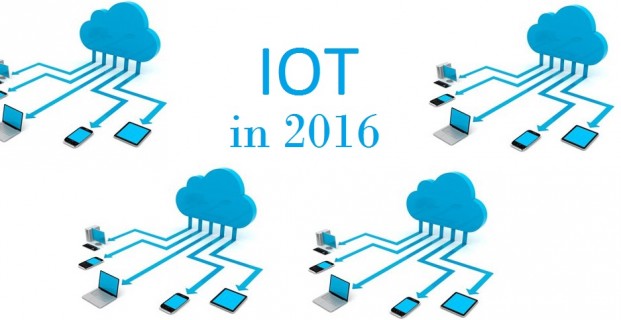 The “Internet of things” is large number of smart devices and objects which work on connected internet networks. These are completely integrated with sensor detectors and also allow automation as well as remote access. The search engines like Google are flooded with a number of search requests to know the most latest buzz word on the block “IoT”, the short for Internet of things, which is connecting the real world with the virtual world.

Detecting and easing troubles of life is the underlying motive behind the rapid developments in the IoT Analytics by the IoT developers. The time is not far when the people will be flabbergasted to have a car with Internet connection and also have smart fridges which will sense and inform the need for refilling the milk container in 2016. Below are some interesting IoT developments trends in store in 2016.

The bigger and better revolution inducing sophisticated mechanisation of work is becoming possible with the advanced Robotic technology empowerment in 2016. The robots unable to walk or do the complex human functions at the nascent stages of development now use indisputable technology for its construction and will be used to perform a number of industrial works like packaging. Robots with set perfect algorithms also will outperform humans in household duties like cleaning rooms, cooking. The IoT analytics inbuilt allow robots to teach the other robots too.

2.     The accelerating developments in hologram technology

The dextrous IoT developers have made the hologram technology more impressive in 2016. The real looking 3D images of objects, human figures in high definition which float in the air will now be massively being used in many multimedia movies. The 2016 is seeing the advances in the hologram projection with the help of smart phones.

All the imaginations of human beings are actually becoming a reality with the latest IoT developments in the wearable tech devices. Besides the smart watches, the 2016 IoT trend is catching up for smart clothing and shoes.

3D printing printers are becoming a cheap and easily available to masses with the structural changes evidently happening in 2016.  3D printing has evolved now as cheap metal powder, inks and furnaces will be used rather than the exorbitant priced laser beams. This metallic 3D printers result in 3D prints are offering lot of flexibility for prototyping as the mental prints can be transformed into various shapes before sintering of these metals take place.

IoT are powering a number of Industrial sectors with IoT sensors in 2016. They can collect a lot of data from sensors which are placed on manufacturing equipments. This data collected can be used for production analysis.

6.     The cloud connection in home security systems and software applications

Low cost surveillance and security systems remain the focus in 2016. The home security cameras will become cheaper as the storage of the camera data will be done over the cloud rather than on servers in 2016. The multiplying number of applications will also be connected to cloud to derive benefits of speed, space.