Debuts Galore at the 2014 Apple Conference

The 2014 Apple Conference near its headquarters in Cupertino, California turned heads by the bunch with new devices, a new payment system and new a smart watch. If you haven’t had the chance to watch it live, here is our lowdown on the key highlights of the glittering events that was as many as 4 launches in one dazzling evening. 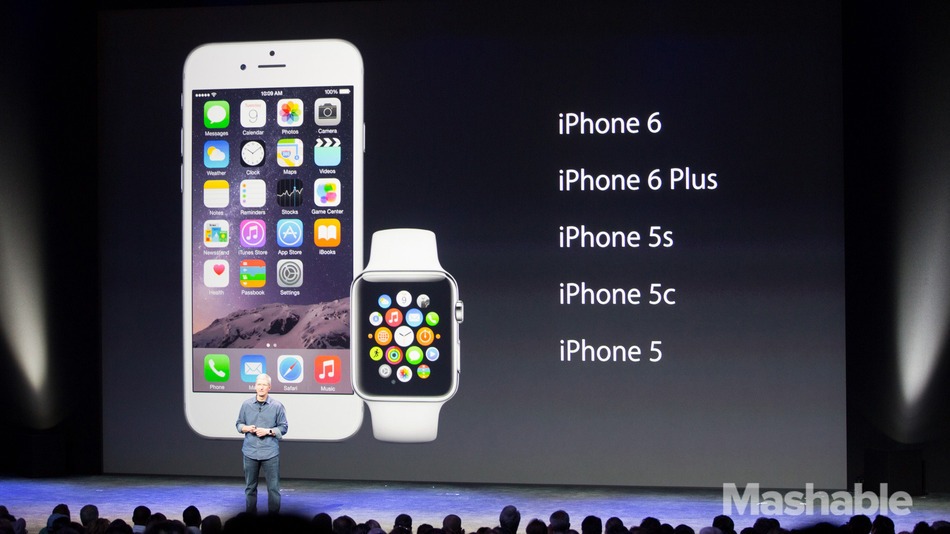 #1 – iPhone 6 and iPhone 6 Plus – The device every loyal Apple fan has been waiting for was finally announced by Tim Cook, the Chief Executive of Apple. While the basic look of exterior matches the iPhone 5, the slightly rounded corners managed to hold attention. Also prominent was the protrusion of the camera lens out of the phone’s body. While the iPhone 6 sports a 4.7 inch screen, the iPhone 6 Plus boasts of a huge 5.5 inch screen – the biggest screen size on iPhone till date.

Both the phones feature Retina HD display, iOS8 and 20 LTE bands. They run on the proprietary Apple A8 64-bit 2nd generation SoC that contains a little over two billion transistors built around a 20nM process. Apple claims 25% speedier CPU and 5% boost on graphics. 1

The price sensitive consumer would be forced to think twice before ordering the new iPhone 6. However, crazy fans around the world will see no problems in shelling out $299 for 16 GB, $399 for 64 GB or $499 for a 128 GB iPhone. The interesting thing here is the increased storage made available in place of the maximum 64GB space in previous iPhones. 2

We are sure that the new editions will be a delight to both the iOS app developers as well as the iPhone users.

#2 – Apple Pay – The conference also marked the debut of Apple Pay, a new payment process that uses NFC and fingerprint-sensing TouchId to enable purchases directly from the phone itself. Users simply have to get a one-time credit card verification done from their bank. They can then use Passbook, Apple’s online merchant services, to make payment at a wireless tap-and-pay terminal. Tim Cook claims Apple Pay to be “an entirely new category of service. And it’s all about the wallet”. 2

#3 – Apple Watch – Apple also officially announced its first Apple Watch at the event. It has an accuracy of +/- 60 milliseconds and comes in six strap styles and 2 metal frames color tones. Some of the key features include Siri integration, touch screen, a gyroscope, a heart monitor and an accelerometer. It also doubles up as a “comprehensive health and fitness device” by using a three-ring system for monitoring physical activity everyday and gauging it against set goals. It will be available from 2015 onwards at a starting price of $349.

Tim Cook’s love for music was evident when he mentioned the iTunes festival in London and the growing fan base of iTunes. He then announced the final performance of the evening by U2 and helped distribute the band’s latest album for free to the participants.

Write in to us and tell us which of the product launches of the evening did you find the most enticing?