Do We Need Artificial Intelligence?

AI was coined by John McCarthy, an American computer scientist, in 1956 at The Dartmouth Conference.

According to John McCarthy, it is “The science and engineering of making intelligent machines, especially intelligent computer programs”.

Have you ever been so lazy to be stalled on your bed with packets of tortilla chips and the latest episodes of Game of Thrones, that you just fantasized a remote control with multiple buttons to open the door or turn the fan on or do all that boring stuff?

Oh wait, that still requires you to hold the remote and press the buttons, right? Gee, why don’t we have a robot that would just read our mind and do everything from household stuff to attending the unwanted guests without asking anything in return. Firstly, such robot will have to be super intelligent.

Not only will it have to be efficient to perform routine tasks, but also understand your emotions viz-a-viz, mood swings and your behavioral pattern by observing you every minute and processing the data of your actions and emotions. Apart from the hard-coded seemingly basic set of functions, which in itself is a mammoth task, the machine will have to progressively learn by observations in order to perform as good as a smart human to serve you.

While a lot of this has been significantly achieved, it is still a very hard task for a machine to detect, segregate and arrange scented towels, hairdryers, Nutella box or contact lenses from a pile of junk than computing the complicated Euler product for a Riemann Zeta function. Machines can be entirely clueless and result into wrong outputs for what seems obvious that humans can solve in just a second’s glance.

Firstly, Artificial Intelligence is not the artificial intelligence Hollywood would have us imagine it to be. When people talk about ‘volcanic’ changes in ‘AI’ they are talking about one particular field of technology: Machine Learning and within that field, Deep Learning. Machine Learning is a very literal description of the technology it describes, that is a program written to learn and adapt. The pioneering technology within this field is the neural network (NN), which mimics at a very rudimentary level the pattern recognition abilities of the human brain by processing thousands or even millions of data points. Pattern recognition is pivotal in terms of intelligence.

A lot of people assume that we are developing general AI rather than applied AI. Applied AI is intelligence, but in a very limited field and requires supervised training. For example, in recognizing human faces (Facebook), driving cars (Google Autonomous Cars),  namely matching teachers to students for optimal outcomes. A general AI on the other hand, is not limited to a narrow field where humans still have to impose certain rules before it can ‘learn.’ It learns ‘unsupervised’. To clarify, there are hundreds of companies using applied AI such as a vacuum cleaner that knows how to avoid your cat, there are none that have developed general AI like the Terminator.

We are getting closer to general AI though. There is a developing technology, “Adversarial Training of Neural Networks“, where the data from one machine learning program helps to train the other in a kind of closed loop. This is the technology that Google and Facebook have been flouting a lot recently. An example of this might be in medicine, where one ML program is used to diagnose a patient, and another is used to prescribe a treatment. The two programs may train each other in that correct treatments suggest correct diagnoses and the correct diagnosis may lead to different treatments, and so on.

AI is humanity’s quest to understand itself.

It is our attempt to explain things that define us and placed us on an evolutionary pedestal: Our ability to reason and think, to be self-aware, learn complex patterns and create and achieve better and bigger things.

In short, it is an attempt to map how our brain which is something more than just the grey matter in our head, works.

Attempting to generate ‘intelligence’, which is a broad term we’ve come to use to define all of our uniqueness artificially maybe humanity’s ultimate self-reflection. It could be the culmination of centuries of pondering about philosophy, psychology, religion, biology, chemistry and a million other fragmented sciences and non-sciences, which we have developed as we grew to explain ourselves and the world around us.

The strange paradox is to decide whether we need AI or not one has to decide whether humans should be like Gods or not. At the moment,we are like the Gods. We could either go back to being human, everyday animals or  we have to get good at being gods or we risk our survival. 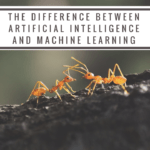